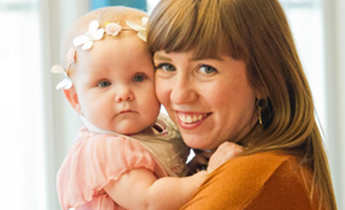 Natasha Rawlinson always dreamed she’d give birth to her children naturally, from the comfort of her own home. But living in a rented apartment in the Chicago suburb of Elmwood Park, she knew a home birth wouldn’t be the right choice. Natasha went with the next best thing: a water birth at West Suburban Medical Center’s Family Birthplace. Natasha’s birth plan included laboring in the water, without drugs or medical intervention, in the company of her husband, doula and midwife.

“I was born in England and grew up in South Wales,” Natasha says.  “Many women in the U.K. have natural births, so it was something I’d been thinking about for a long time. I did my research and found the midwives at West Suburban to be well-trained and supportive of water birth.”

Not exactly as planned

Natasha began having contractions on a Saturday morning. Nervous and hopeful, she and her husband rushed from their apartment to West Suburban Medical Center, only to return home a few hours later because Natasha’s labor had stopped. Two days later, Natasha’s contractions began again, this time with greater intensity. She labored for nearly 30 hours, but only dilated four centimeters.

“The nurses and midwives were all so supportive of my desire to have a natural birth,” Natasha says. “After my labor stalled, they let me walk around to try to get my labor started again naturally. And when my labor wasn’t progressing, rather than telling me what to do, they had a conversation with me about my options.”

Natasha’s options for kick-starting her labor included receiving drugs or breaking her water. Wanting to avoid drugs, Natasha opted to have her water broken, but with that came another obstacle.

“When my water bag was broken, we learned that the baby had passed too much meconium (baby’s first stool) into the amniotic fluid, which posed a risk to her.  I was told that a water birth was no longer possible,” she says. “Of course, I was disappointed, but I was still hopeful I could get through without drugs.”

Although Natasha’s labor began again after her water was broken, her cervix still wasn’t dilated enough to start pushing. Exhausted, Natasha agreed to have an epidural to ease her discomfort enough to allow her to rest until the next morning.

“It wasn’t what I planned or hoped for, but I appreciated how everyone listened to my concerns. They really did everything they could to get my labor going naturally, but in the end, the drugs were necessary.”

After nearly 34 hours of labor and three hours of pushing, Natasha gave birth to a 10-pound baby girl named Mati. Then came another unexpected situation. Although Mati was healthy, she developed a fever shortly after birth. Patients who choose to deliver their babies at West Suburban Medical Center take extra comfort in knowing that Lurie Children’s Neonatology Team is on staff at West Sub 24/7 and that there are transfer protocols in place to offer the sickest newborns best possible care. Thankfully, Mati’s condition was not that serious.

“We wanted to avoid drugs for Mati, but because of the fever and possibility of infection, she needed antibiotics,” Natasha says. “The pediatrician explained everything to us, so we trusted it was the right decision.”

Knowing how important one-on-one time is for mother and baby, doctors suggested Natasha have time alone with Mati before administering the antibiotics.

“The nurses were so good with Mati,” Natasha says. “One of them offered to hold her while she was given the IV. And the next day, those same nurses came in to check on us. They were amazing.”

“We tried to keep as much of Natasha’s birth plan intact as possible by encouraging movement, oral hydration and making informed decisions about her care,” Cynthia says. “Ultimately, the goal is to have a healthy mom and a healthy baby.”

Although she wasn’t able to give birth naturally with her first child, Natasha says she plans to return to West Suburban and try again for a water birth with her next child.

“Nothing in our birth plan went as expected,” Natasha says. “But despite that, it was still a positive experience, which I think says a lot about the quality of the doctors, nurses and midwives at West Suburban.”

Oh Baby! How to Pick a Hospital for Your Special Delivery

It may feel like every decision just got a little more complicated—and the baby’s not even born...
Read More

Water Labor and Delivery at a Birthing Center

Welcoming a baby into the world is one of the most memorable and rewarding life experiences—but...
Read More

The Family Birthplace of West Suburban Medical Center has been recognized for the second year in a...
Read More